Premise: In 1998 the globe experienced a Super El Niño Southern Osciallation (a western Pacific Ocean inversion where very warm deep water comes to the surface). This produced a natural spike in the global temperature (as has again happened in 2015). But there was also another interesting phenomena that paralleled this 1998 Super El Niño. Beginning in 1997 Indonesian peat bog wildfires released an enormous spike of CO2 into the atmosphere which peaked in 1998, but continued until another peak in 2004. During that same time period the adherent-establishment was warning that the Arctic was warming at an unprecedented rate, and with that warming the permafrost was melting (releasing even more CO2 and methane), and would produce not just accelerating global warming, but runaway global warming. (Runaway global warming is described as a parabolic rise in temperature.) It was a veritable perfect storm: Super El Niño + peat bog fires CO2 spike + melting permafrost CO2/methane spike. 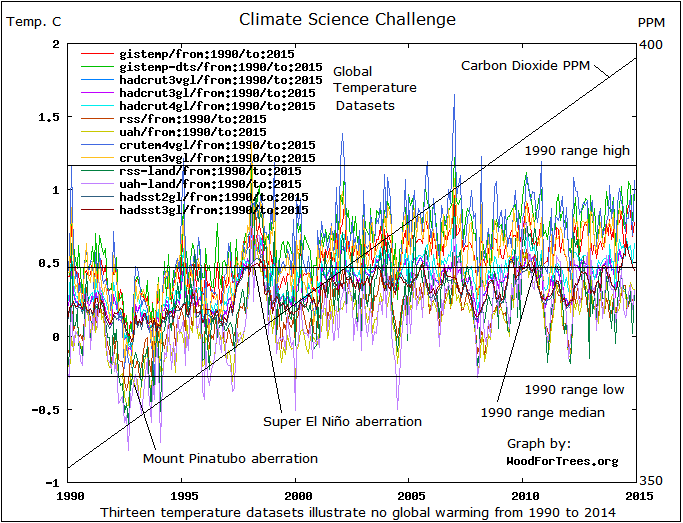 Question: Can you see this perfect storm revealed in what was supposed to be a runaway (parabolic) rise of global temperatures from 1998 to 2004? No, neither can I.

Conundrum: The parabolic effect of runaway global warming is presented by the adherent-establishment as a warming arctic with melting permafrost releasing previously captured CO2 and methane into the atmosphere, which itself causes a further acceleration of global warming, which then provides a positive feedback in the arctic with even more melting of permafrost releasing even more CO2 and methane, and so-on – causing a supposed parabolic rise in temperature. Oh – and because of the strong feedback effect, runaway global warming is also supposed to be unstoppable once it is initiated.

Conclusion: The empirical evidence shows that there is no such thing as CO2/methane-based runaway global warming. If there was it would have occurred during the perfect storm of 1998 to 2004. It didn’t. In fact, 1999 and 2004 produced relatively significant down-spikes in global temperature, paralleling our previously witnessed opposing correlation between fossil fuel emissions and temperature, albeit, on a smaller scale.

[Go to the beginning of the Climate Science Challenge]