Here is a graph presenting 13 monthly global temperature datasets in aggregate, from the benchmark year of 1990 to 2014:

Note: All global temperature datasets utilized to create this graph have been obtained from the original sources by the WoodForTrees website (which claims no agenda either for or against the theory of anthropogenic global warming). The graph is comprised of climate science’s own datasets from organizations like NASA, the UK Met Office, Remote Sensing Systems, University of Alabama In Huntsville, etc. – the WoodForTrees website just displays the data as a graph that these institutions provide. The three horizontal lines and the carbon dioxide PPM line were added for illustration.

There are two significant natural aberrations noted during this period. Ash discharged into the atmosphere from the Mount Pinatubo volcanic eruption cooled the global temperature by reflecting sunlight back into space for over two years, and thus caused a rebounding rise in global temperature during the mid-nineties when the ash settled, that was then accentuated by a 1998 Super El Niño Southern Oscillation.

Riddle: Taking into account this natural drop and natural rebound in global temperature of the early to late-nineties, can you see any empirical evidence (data observation) of anthropogenic (man-made) global warming during the period from the benchmark year of 1990 to 2014?

Conundrum: The aggregate graph of global temperature datasets shows consolidation from 1990 to 2014. Consolidation is when the body of up and down data movements (the data spectrum) becomes range-bound – unable to cleanly break out from the benchmark range (high and low), or median-bound – where the spectrum repeatedly returns to a median line. In this case the spectrum in the graph does not cleanly break out from the range of the benchmark year 1990.

Note: As can be seen, there is no single annual global temperature, but an annual temperature range. For example, the year 2008 has a virtually identical range to the benchmark year 1990, and every year following 2008 falls within that range. 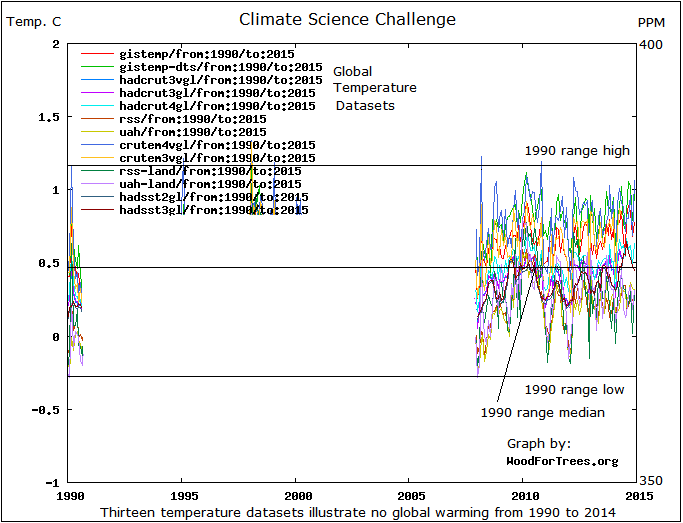 Conclusion: According to the empirical evidence of these 13 aggregate datasets, while atmospheric CO2 content has skyrocketed during this inclusive 25 year period (from 350 PPM to 400 PPM), there has been NO non-natural global warming since the adherent-establishment’s benchmark year of 1990. In fact, there has been NO overall warming at all – the temperature datasets have been range-bound to the benchmark year 1990. (Update: Another Super El Nino occurred in 2015. As with the 1998 aberration, the global temperature datasets have been settling since then.)